Working to Make the Good Even Better

This Thanksgiving holiday, you could very well be serving turkey and stuffing with a side of purple, blue, or red mashed potatoes.

A team of researchers that includes WSU scientists and their USDA colleagues are working to develop potatoes with high antioxidant and nutrient levels. These added elements add color the potatoes in a variety of shades, from deep eggplant to crimson red.

“The colors in the potatoes are due to anthocyanins, very common pigments which are associated as being very strong anti-inflammatories and antioxidants,” said Chuck Brown, a USDA Agricultural Research Services scientist. 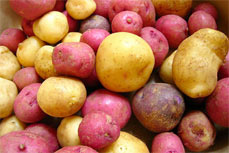 The benefits of having antioxidants fortified within potatoes are numerous, said Rick Knowles, one of the WSU scientists working on the project and chair of the Department of Horticulture and Landscape Architecture.

“These antioxidants will make the potatoes more nutritious, and a diet high in antioxidants has been shown to reduce levels of cancer risk,” Knowles said. “But also, these colored potatoes could be considered more appealing in a culinary sense.”

Knowles said it was important to breed these potatoes because potatoes are often perceived as unhealthy.

“Potatoes often get a bad rap, but the reality is potatoes are one of the most nutritious foods out there,” Knowles said. “There has been a tremendous research effort to re-educate the public on the benefits of potatoes. These potatoes with antioxidant properties are another step in the right direction.”

But before these potatoes can be sold to consumers at the local grocery store or made into large batches of purple potato chips, research must be conducted on how to properly grow and farm these tubers, said USDA ARS scientist Roy Navarre.

“Right now, we are working on researching how to grow these potatoes, because these can not be grown the same way as more familiar potatoes,” Navarre said. “These potatoes need to be grown in a way so as to maximize their phytonutrient content.”

“Because potato varieties do not always grow the same way, new varieties must be put through rigorous research to determine the best management practices,” said Mark Pavek, potato agronomist and associate professor in WSU’s Department of Horticulture and Landscape Architecture. “Our goal is for growers to produce these potatoes profitably while keeping our environment and limited resources healthy.”

The project has been a highly collaborative effort, spanning several states and institutions, including USDA, the University of Idaho and Oregon State University.

“This is a team effort,” Pavek said. “We collaborate with researchers and industry people across the globe.”

Although many different institutions and researchers are involved in the project, the goal remains the same, Navarre said.